Computers use binary to represent numbers. Binary is similar to our normal denary (base 10) number system, but it uses base 2. This means that place values work slightly differently.

Denary place values are so familiar that you almost don't realise that you are using them. Consider the number 2107:

Binary uses base 2, which means:

As you can see, the first place represents units, then twos, then fours, then eights, etc. To calculate the value of the number, we add 1 eight, 1 four, no twos and 1 unit, which gives 13.

This table show how to count from 0 to 15 in binary. Notice that pattern of 1s and 0s in each column: 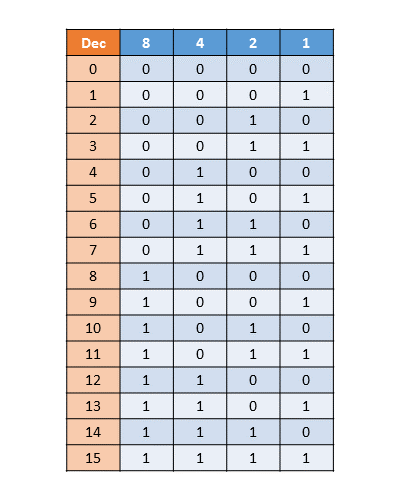 To convert a binary number to base 10, draw a simple table like this:

As an example, we will convert 83 base 10 to a binary number. You can convert denary to binary using the same table, initially empty:

The technique is simple. Keep subtracting the biggest power of two that you can, until there is nothing left.

Our final table has ones in the positions shown. The remaining positions can be filled with zeros, giving a final binary value of 01010011.