An algorithm is a step-by-step procedure for solving a particular problem.

We often use decomposition and abstraction to analyse the problem. We may try to recognise patterns to find existing techniques that might be applied top the problem.

When we design an algorithm for a computer to use, we must specify each step very precisely, so that it can be implemented as a computer program.

To define an algorithms we usually need to specify:

As an example, building on the previous sections, we will define an algorithm for drawing an n-sided polygon of a given size, using turtle graphics.

The algorithm has 2 inputs:

By radius, we mean the radius of the circle which encloses the polygon. In other words, the distance from the centre of the shape to one of its corners: 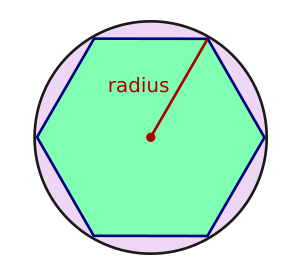 Clearly there are some constraints on the inputs:

In theory, there is no limit to the number or sides, or the radius of the polygon. When you code up the algorithm, you might decided to set maximum values to avoid problems. For example, if you ask for a billion sides you might choose to give an error, otherwise it might take a very long time to draw! These limits aren't really part of the algorithm, they are called implementation details.

The output of our algorithm is simply the polygon, drawn by the turtle. Depending of the type of turtle, it might draw on the screen, drag a pen on paper, or just move around on the floor.

We must calculate the angle the turtle must turn through at each corner. We have previously worked out that:

We must also calculate the length of each side. This is given by (See here):

Here is the example code in Python. It can be easily rewritten in other languages that support turtle graphics: